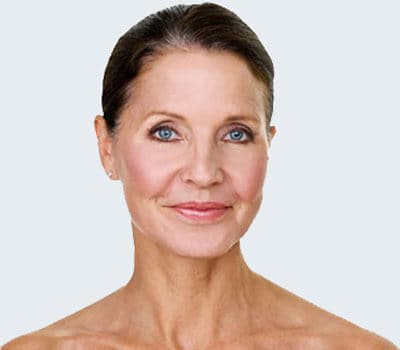 Facelift is a procedure performed to restore the shape and volume of the face. The loss of skin elasticity leads to sagging and formation of jowls and deepening of the nasolabial folds, while the loss of fat volume causes deflation in the upper cheeks. Facelift is a powerful procedure that corrects all of these changes. It involves surgical lifting and suspension of the deep facial tissue and tightening of the skin through carefully designed incisions that leave inconspicuous scars. Fat grafting is frequently performed at the same time to replace the lost volume.

Facelift is a procedure that restores the youthful tone and shape of the face. As we age, our skin starts losing its structural integrity from the frequent degradation of collagen and elastin. This occurs due to aging and sun exposure. Sagging occurs in two main layers of the face, the skin and the layer immediately deep to it, which is known as the SMAS (superficial musculoaponeurotic system). The SMAS is a strong layer composed of fibrous and fatty tissue that is organized in compartments (Figure). It is fixed in place by ligaments known as the retaining ligaments of the face (figure). Those ligaments are denser in the fixed areas of the face close to the ear and the chin and are less dense in the mobile area of the face that changes position during animation and smiling, such as the cheek. As a result, the mobile area sags with time since it has less support, and this sagging become responsible for two common features of facial aging, jowl formation and midcheek descent.

Dr. Alghoul’s surgical approach to the face focuses on restoring the tension and position of the SMAS layer, to achieve the most natural results. As a result, the jowls are eliminated, and the youthful cheek contour is restored. The type of technique used depends on the patient’s needs, features, and anatomy.

What are the different types of facelift?

Different terms are used to describe facelift procedures, depending on the extent of surgery. Generally speaking, a “mini” facelift is done at a younger age (late forties and early fifties) and involves tightening the face and cheeks through a short scar without opening the neck (No neck incision). A full facelift includes more major neck work through a neck incision and a longer incision around the ear.

What are the areas not improved with facelift?

The upper and lower lip lines and wrinkles are not improved with facelift alone. Another procedure, like chemical peel, laser treatment or dermabrasion, is usually needed to treat those lines. The lower eyelids will have some improvement mainly at the junction of the eyelid and upper cheek, especially when fat grafting is performed. However, if significant improvement in lower lid fat bags and skin tightening are desired, then a lower lid lift or blepharoplasty can be combined with a facelift.

Where are the incisions placed?

Incisions are hidden within the hairline and around the ears. In cases of full facelift, another small incision is placed on the undersurface of the chin to address the neck. Once healed, the scars are inconspicuous.

How long do the results last?

Facelift results can last for up to 10 years. You will continue to age naturally after facelift surgery. Skin care is critical to maintain the results and slow the aging process.

How tight and swollen is my face going to be?

A natural look is the goal! Mohammed Alghoul, MD, strives to provide his patients with a youthful, refreshed look without making your facial skin appear unusually tight or your cheeks abnormally full. Fat grafting will be performed in carefully selected areas and small amounts. The end result should be a natural change, yet a noticeable improvement.

Facelift is performed as an outpatient procedure, often under general anesthesia. A one-night stay at the hospital is optional and encouraged. Sometimes a drain is placed and removed the following day in the case of mini facelift and in a few days in a full facelift.

You can engage in light activity starting the following day of surgery. Return to normal activity and exercise may take one to two weeks. Minimal bruising is to be expected after surgery and it subsides within a week. Post-operative swelling is normal, especially when fat grafting is performed, and resolves gradually over one to two weeks. Full results may not be seen until one to two months.

If you’d like to schedule a consultation with Dr. Alghoul in our Amman, Jordan office to discuss facelift surgery, please call .